Duck Donuts is a donut shop we visited in the Outer Banks of North Carolina. They make custom donuts just for you!

You also get to watch them making your donuts! I had Irish cream with caramel. It tasted so good, soft  and warm. It might be the best donut I have ever had. The only downside is that Duck Donuts is only located on the east coast. 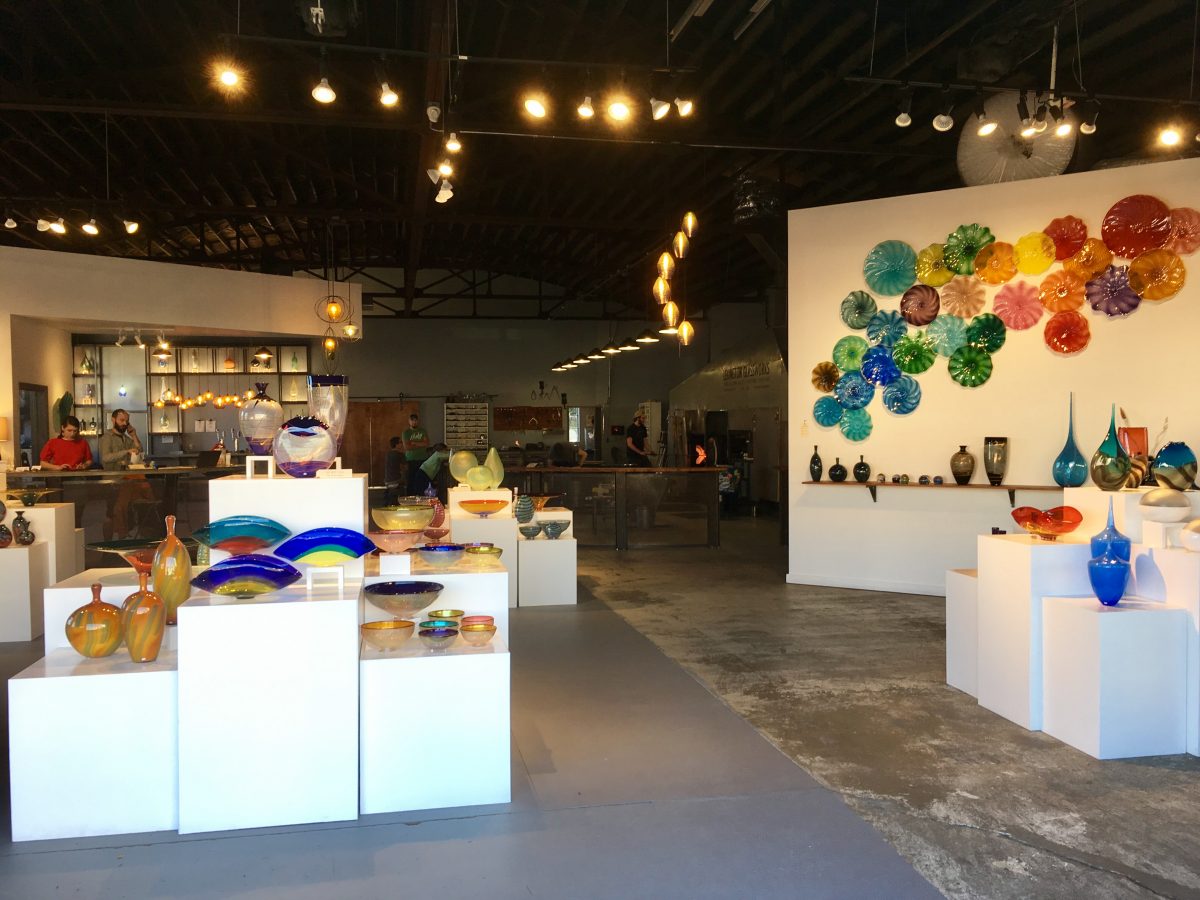 While we were in Asheville, North Carolina we went and saw Lexington Glassworks. It is a business that makes custom glass in unique shapes and colors. If its glass, they make it. The coolest thing about it was that you got to watch them making their custom glass sculptures for free! 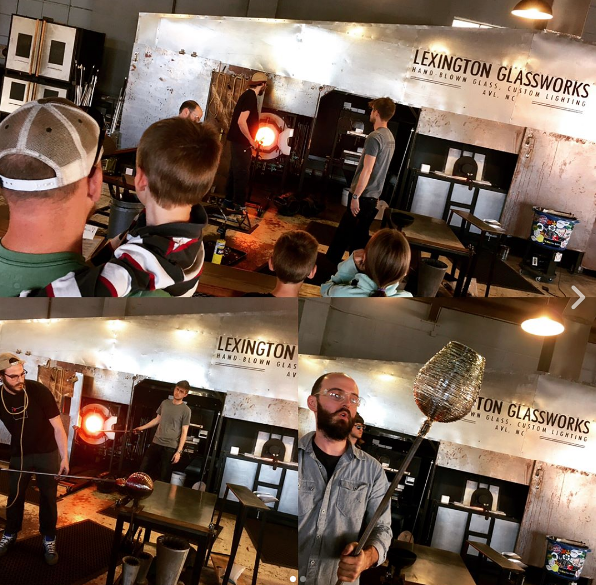 First, they take some molten glass on a metal pole. Then, they blow, shape and dye it. Finally, they let it cool, and sell it. The whole process can take anywhere from fifteen hours (they have to let it cool down a long time) to forty-eight hours. In case you were wondering, if any any of their projects break or go wrong if they have not dyed it yet they can just melt it up again. If it is dyed, they smooth it out into paperweights and sell them. The Lexington Glassworks is a interesting place to find out how glass sculptures are made. 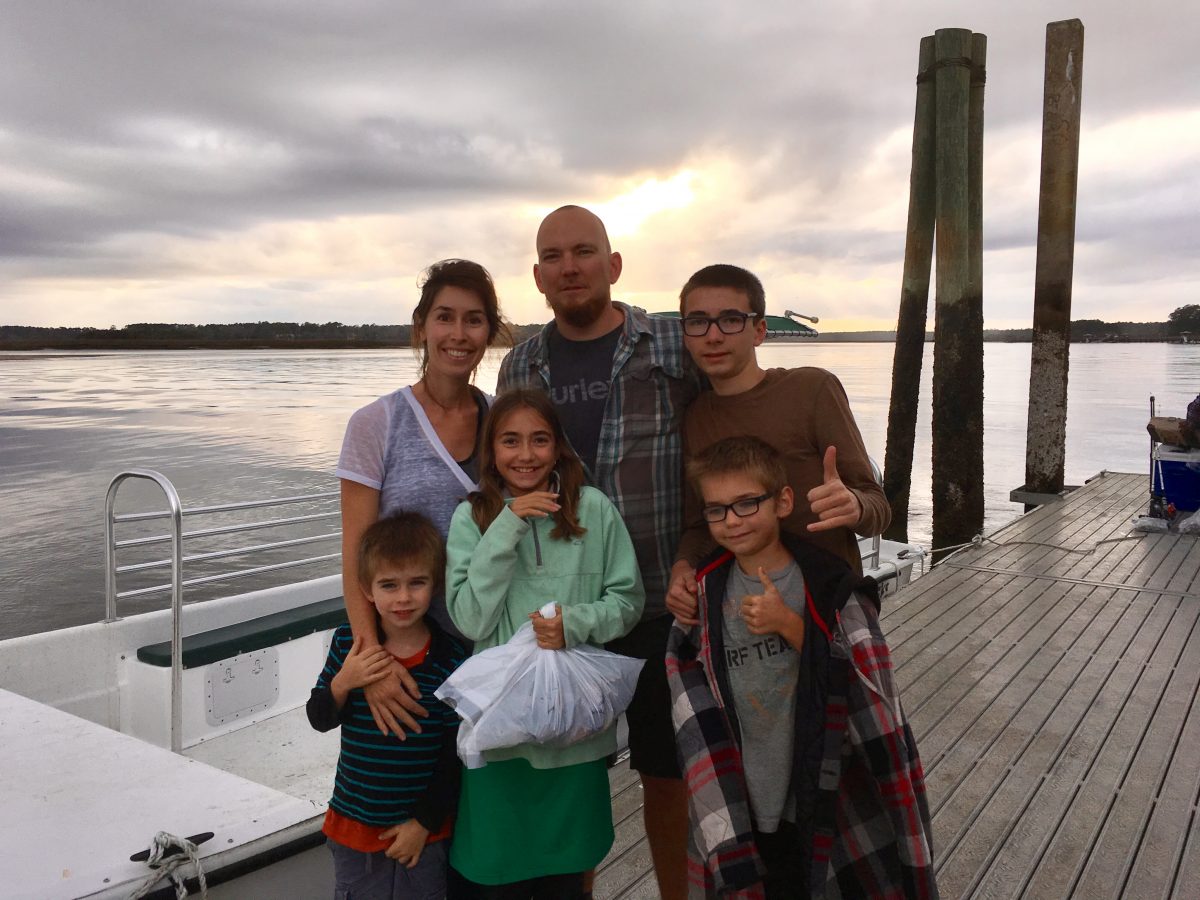 While we were in Georgia we got to go crab catching in South Carolina. We went out on a boat and someone showed us how he caught the crabs in a trap. It was very interesting  and I learned a lot about crabs. For instance, you can tell if the blue crabs are male or female by looking at their claws. Females have red at the tips of their claws like fingernail polish. 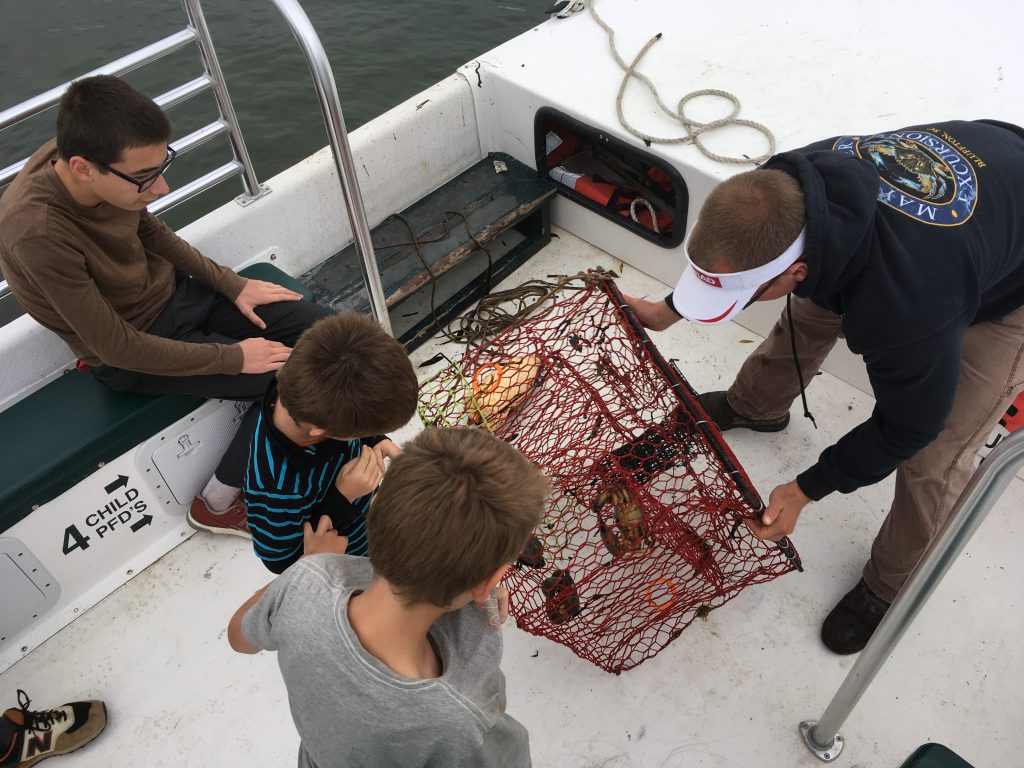 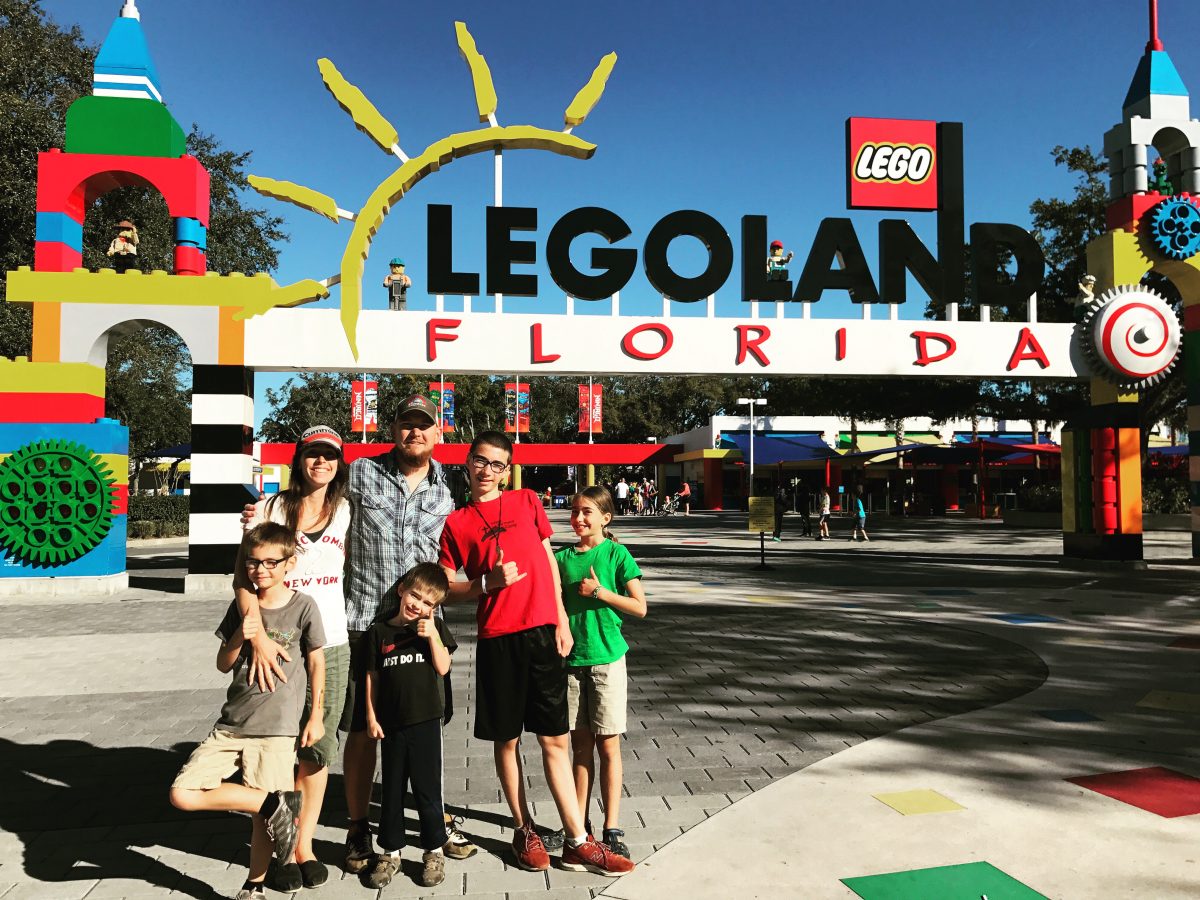 Legoland is a theme park with lots of Lego structures, rides, shops, and attractions. There are two Legoland’s in the U.S. Legoland California and Legoland Florida we went to the one in Florida. Legoland is separated out into different “lands” with different Lego themes like: Lego city, Lego Technic, Lego Kingdoms, and more. 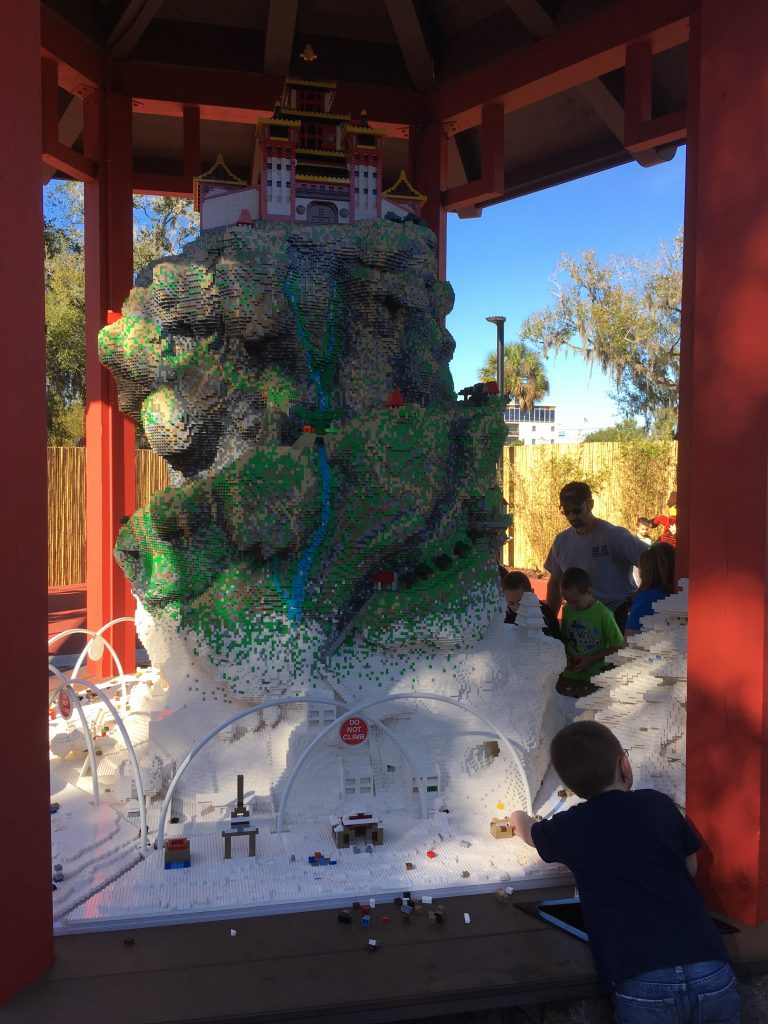 My favorite land was Lego Ninjago. In it there are spinning poles that you ride, a rock climb, Lego building, and a game where you are timed to hit buttons that light up. There is also a really fun 4D ride with 3D glasses. In the 4D ride four people sit down and do different ninja moves with their hands and a laser detects what move you are doing and it takes out the enemies. Each enemy has a different weakness that you can exploit. The ride also makes the room hotter or colder if fire or ice is involved on the screen. Afterword you get to see and compare your score and picture with your teammates, other teams, and the best of the day. Finally, you walk through a Ninjago store. 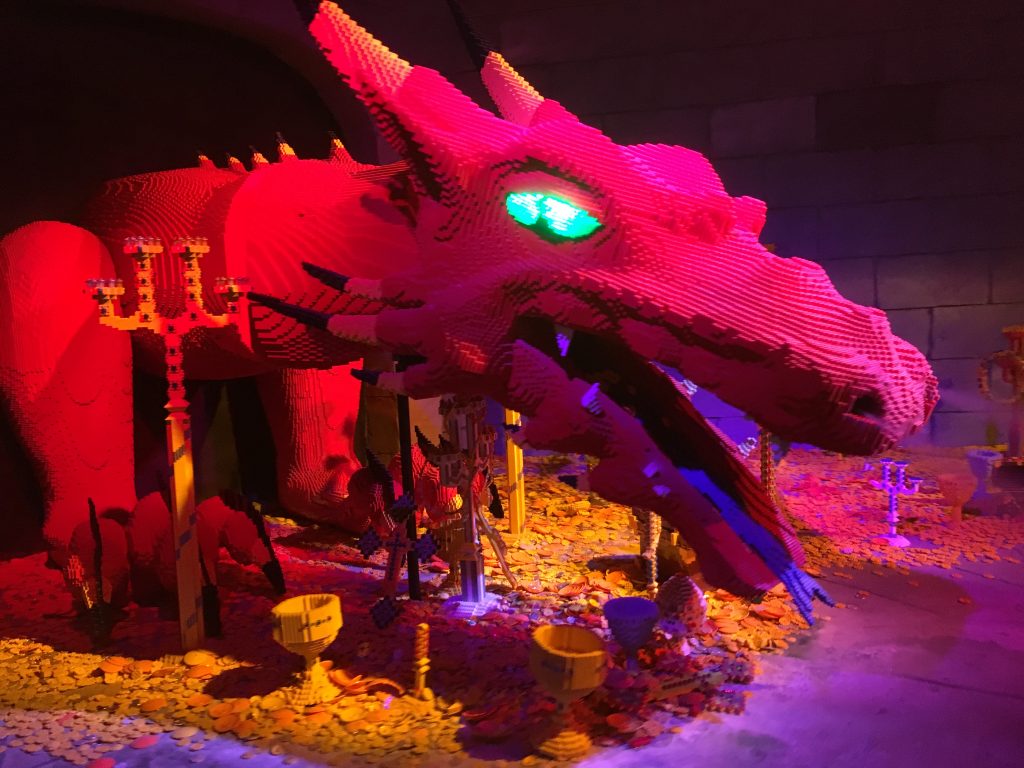 In other lands there was a 4D theater, a water ski show, and a big building where you can build with Legos. Sadly the water park, Lego legends of Chima, and the Lego Friends lands where closed. But other then that Legoland was a great place.

Drones and tornadoes, those are the two different reasons we went to Disney Springs. Disney Springs is this huge free place where you can shop for anything. There are some really cool decorated shops like Star Wars, Marvel Super Heroes and a candy apple store where you get to watch them make the sweets. They even have live music, a huge 10 story arcade, movie theater and hot air balloon rides! On our first visit we saw a Christmas light drone show. It was so amazing!

All those lights in the video are drones! This in not the full show. The full show is about 8 minutes.

We also went to this pizza place where the pizza is one price and you get to choose as many toppings as you want. They make your pizza in 130 seconds or less. I chose all meat. 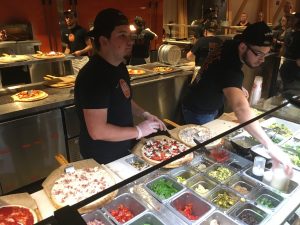 The second time we went to Disney Springs we went because there was a tornado warning. My family and a bunch of my friends went to the bottom of one of the parking garages because our house might blow away,  thankfully it did not. Because there was a lot of wind and rain we hung out until it was safe to go home.

Overall Disney Springs is a great place to hang out. 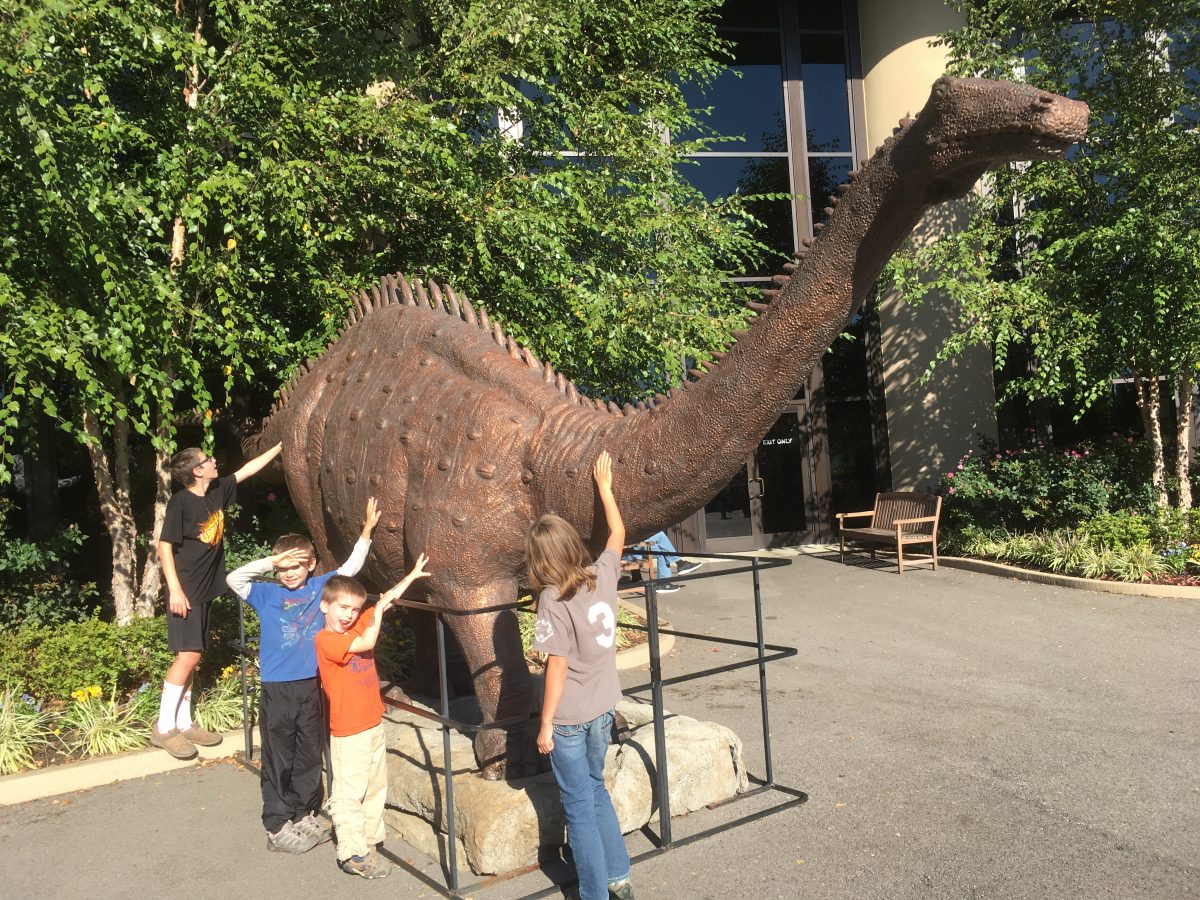 While I was in Kentucky my family and I went to the creation museum. It was fun and educational. The museum was set up so that you walk through the seven C’s of history: creation, corruption, catastrophe, confusion, Christ, cross, consummation. The museum only covered the first four though. It also had a petting zoo with camel rides, and botanical gardens with exotic plants. They had audio tours for all of it as well. The creation museum was really biblically and scientifically educational. I left the museum feeling happy and content. 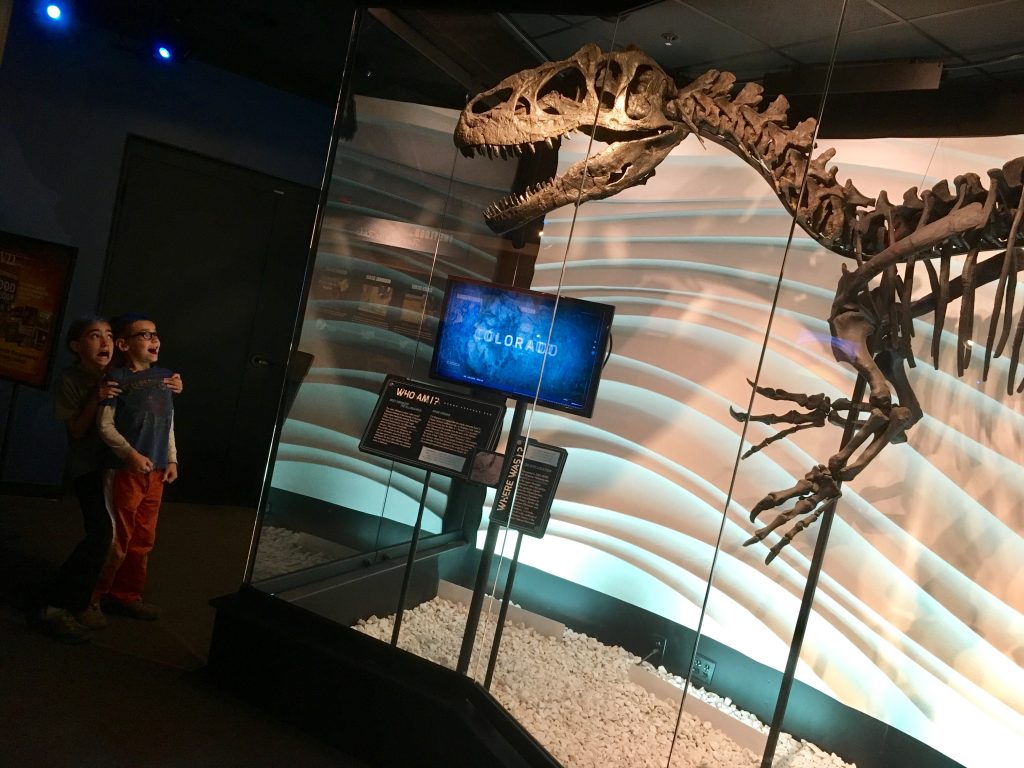 My mom also wrote about her thoughts on the Creation Museum here if you want to read her blog post. 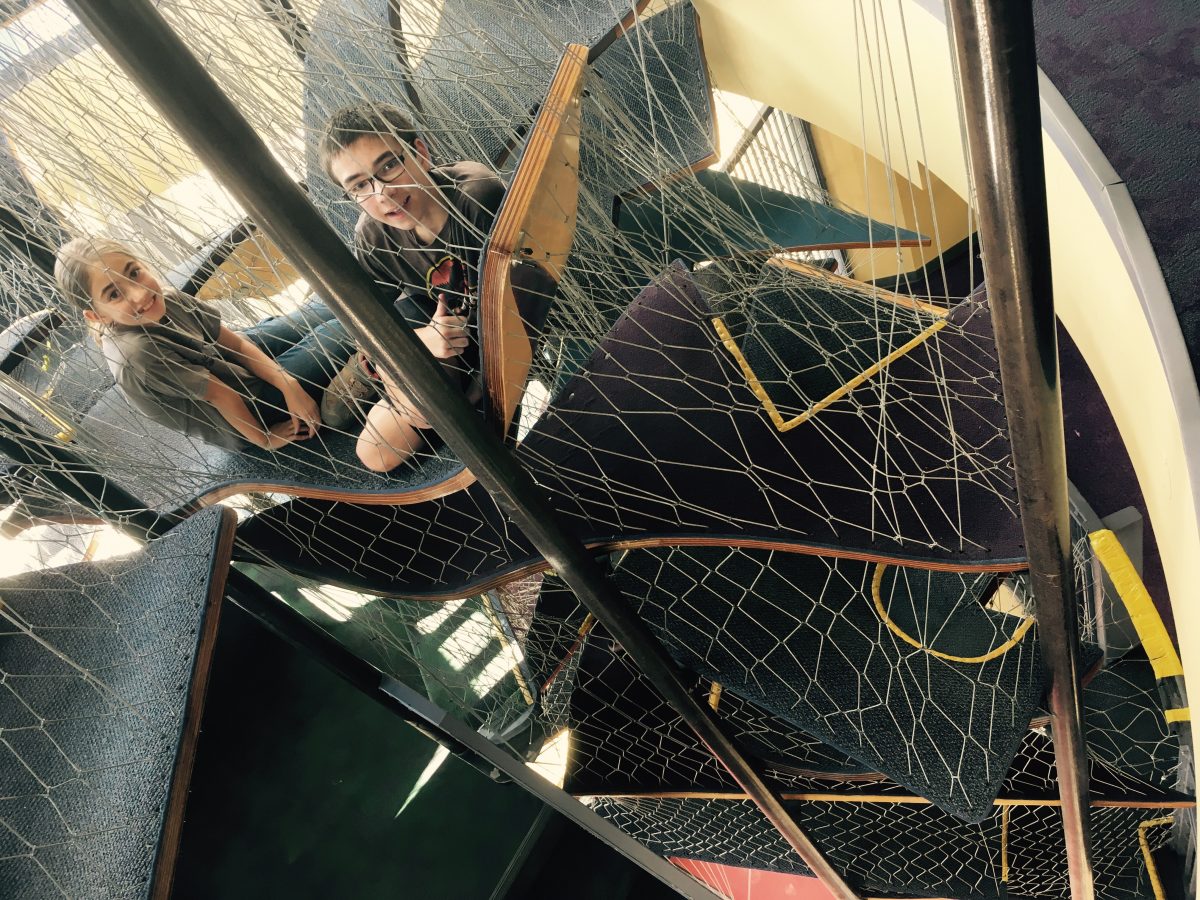 On our trip we went to the children’s museum in Normal, IL. It was so cool! They’re where three whole floors. The first floor was all about people and how we work; there was even an automatic measuring machine and a drum that drummed to my heartbeat.

On the second floor the theme was farming and food. There where little yellow plastic balls symbolizing grain and you can send them through air tubes to go to: farms (plastic cows you can “milk”) processing (where you can “auger” them) and export (a toy village). There was also a huge climbing area and a Rube Goldberg machine (here’s a video).

On the third floor everything was music based, you could even conduct a orchestra with a Wii remote.

The children’s museum was really a fun learning experience. 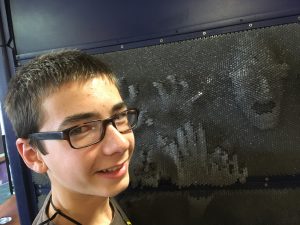 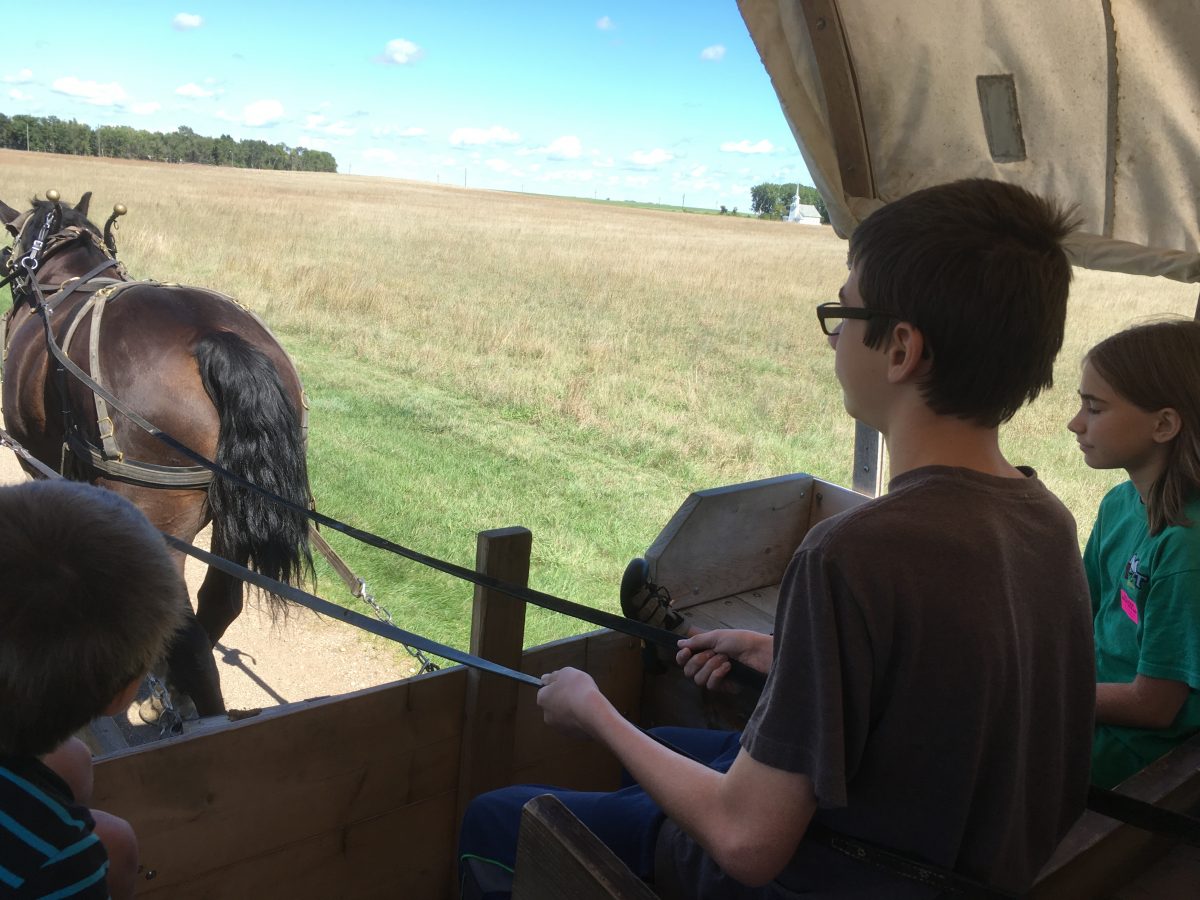 A while ago we went to the Ingalls homestead (as in Laura Ingalls Wilder). It was so fun with lots of hands-on actives like mowing the lawn with a push reel mower, making a jump rope, and making cornhusk people. I also got to drive a team of horses, pumped water from a well, go to a prairie school, and wash my shirt like Laura did. Finally, we got to ride a horse, sharpen a knife on a whetstone, grind wheat and corn, and shell the corn with a grinder.

There where lots of animals there too like: kittens, chickens, and a calf. We had so much fun we decided to stay the whole day. The Ingalls homestead really lets you experience how they lived. 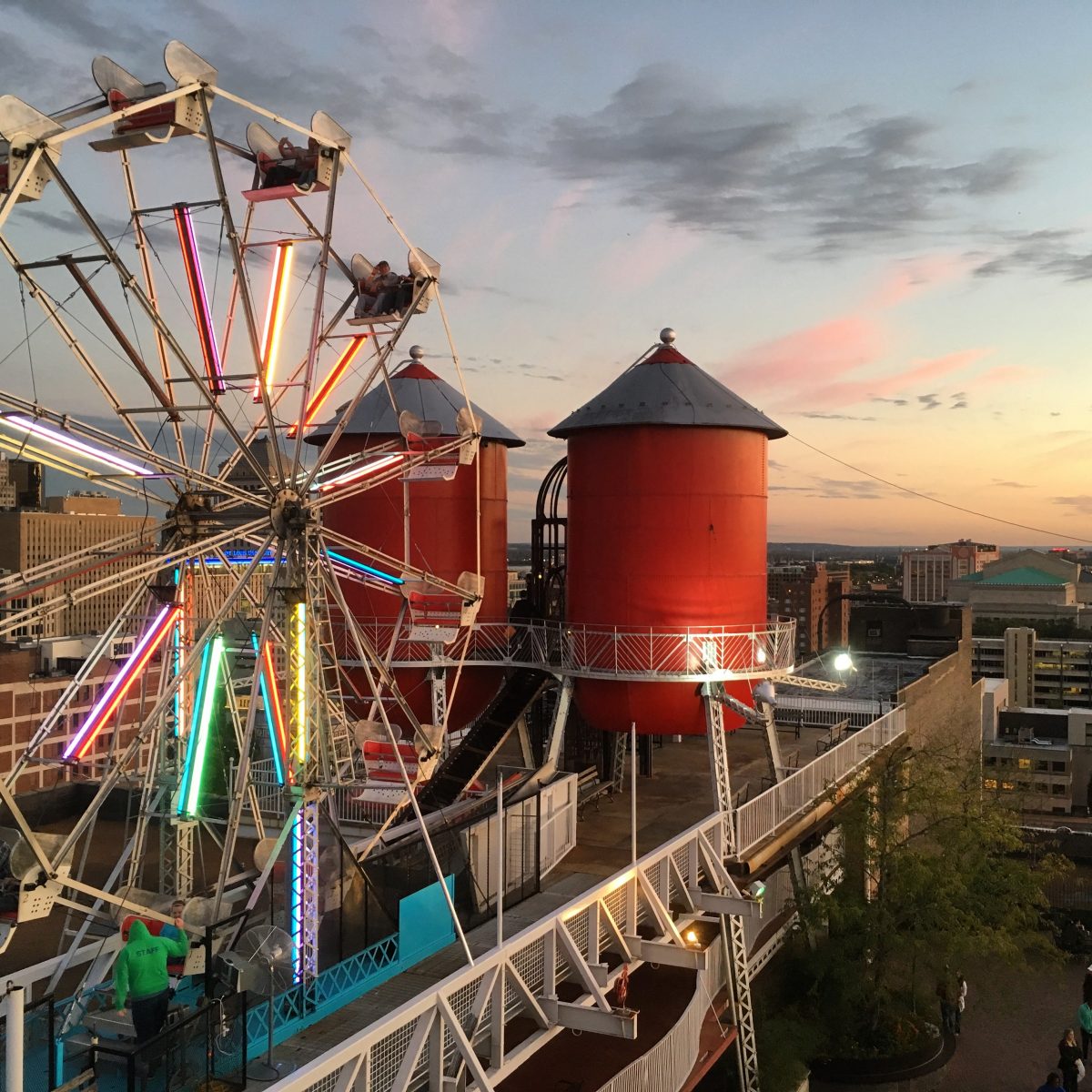 Today we went to a city museum in St. Louis. First of all, it’s made out of an old building and recycled materials–like old pieces of smooth glass or non-sharp metal, sounds fun right? But it was actually one of the most fun places I have ever been to in my life! The indoor stuff was really cool. There were cement caves like a maze in the ground. There was also a huge wooden tree house like the caves, but in the air. Then we saw a funny magic show. But outside was the biggest and most recycled yet! You could climb around in the sky in old planes, towers and machinery, with walk/crawl ways between it all. 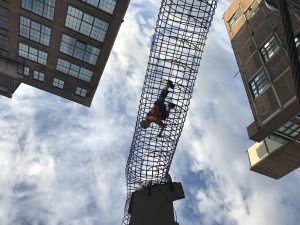 There was also a big ball arena that got pretty wild. But the roof of the building was definitely the best. There was a Ferris wheel and some slides (not the little ones either) and a pond you could skip across on rocks–my foot fell in! There was even a bus that you could go in that hung over the side of the building! 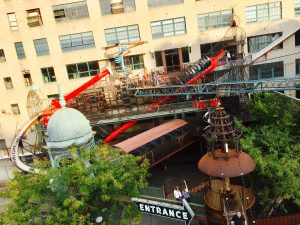 But the best part of the whole museum was the 40-foot slide. First, you had to climb up to the giant metal praying mantis, then you slid all the way down, you even went underground a little! The city museum was definitely the best part of my trip to St. Louis.